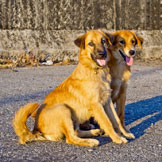 This article originally appeared on Dr. Mahaney’s The Daily Vet column on PetMD as Reducing Pet Overpopulation and Stopping the Dog Meat Trade in Thailand. This is the third of a three part series of Daily Vet articles I’ve written about my recent trip to the Far East. In case you missed them, here are my first two articles: Diagnosing and Treating Canine Dry Eye in a Third World Country  Far East Veterinary Travels: Observing Canine Life in Hong Kong and Touring the SPCA. The final leg of my trip brought me to Phuket, Thailand, where I visited four years prior. Like my stop in Hong Kong, this trip was not a vacation, but an opportunity to build relationships with international rescue organizations. Before leaving the U.S., I contacted Soi Dog Foundation and scheduled a visit to their facility with the intention of partnering with them for my upcoming veterinary television show (about to be shopped to the networks by our production company’s agent). Having read much about Soi Dog’s amazing work, I was eager to see their facility and get a first-hand perspective on the life of Thai rescue dogs and cats. First, you may be wondering about the name: Soi Dog. What does it mean? For non-Thai speakers, what may come to mind is coating a dog in soy, such as soy sauce. But no; soi means street, so Soi Dog is meant to mean “dog of the street.” Of course, we westerners would never eat dog, but there is an unfortunate demand for canine meat by humans in Vietnam (Thailand's neighbor to the East), which Soi Dog is working to end. The dog meat trade is a major problem in Thailand, but Soi Dog is tirelessly bringing those involved in the trade to justice and shutting down their smuggling operations. I met with Gregg Tully, a very pleasant American who now lives in Thailand and works at Soi Dog. He was very generous to give me a tour and participate in an interview, so I learned the following from our time spent together:                       I look forward to returning to Thailand and partnering in a capacity that can make a difference in the lives of the rescued dogs and cats: by offering my veterinary services (medicine, surgery, needle and laser acupuncture, etc.) and promoting awareness of their efforts at combating the dog meat trade through public education.   Thank you for reading this article.  Your questions and comments are completely welcome (I’ll respond). Please feel free to communicate with me through Twitter (@PatrickMahaney) and follow my adventures in veterinary medicine by liking Patrick Mahaney: Veterinarian Acupuncture Pain Management for Your Pets on Facebook. Copyright of this article (2013) is owned by Dr Patrick Mahaney, Veterinarian and Certified Veterinary Acupuncturist. Republishing any portion of this article must first be authorized by Dr Patrick Mahaney. Requests for republishing must be approved by Dr Patrick Mahaney and received in written format.
Dogs