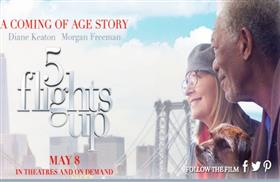 In addition to the work I do everyday as a veterinarian on behalf of pet health and welfare, I’ve been given the opportunity to screen and review an upcoming canine-themed movie. 5 Flights Up is being released in theaters and VOD in May 8 starring Morgan Freeman, Diane Keaton and a lovable Border Terrier.

5 Flights Up is a comedy about the trials and tribulations associated of “life, love, and real estate,” and has the following plot summary:

When Ruth (Diane Keaton) and Alex (Morgan Freeman) first moved to Brooklyn, it was the 1970s — years before gentrification, and years before they would realize that they won't always be physically able to climb several flights of stairs just to get home. Still highly active, yet feeling the undeniable effects of age, the couple opts to put their apartment on the market. But the decision coincides with a flurry of problematic events. A trailer jackknifes on the Williamsburg Bridge and the driver inexplicably flees the scene, putting all of New York on an overblown terrorist alert. The couple's dog becomes ill and the vet bill comes to $10,000. An overwhelming sequence of encounters with realtors, agents, and snotty bargain hunters only adds to their troubles.

Having grown up in central New Jersey and always looked forward to trips to New York City, it was great to see 5 Flight’s Up’s realistic portrayal of life in and around Manhattan.  Brooklyn plays home to Ruth and Alex, who live in close proximity to the Williamsburg Bridge. In fact, the expansive views of the Williamsburg Bridge and Manhattan are a source of inspiration for Alex's paintings and a selling point in the potential sale of their apartment.

The wavering decision to sell their apartment in favor of a building having an elevator to accommodate their senior needs (Ruth and Alex) and the needs of their geriatric canine companion (Dorothy, Alex and Ruth’s Border Terrier) is the crux of the movie.  Unfortunately, Dorothy falls ill with a mobility-compromising spinal injury that reinforces the family’s need to rely on an elevator instead of stairs during on their excursions outside of their flat.

It's hard for me to turn off my veterinary medical mind when watching movies or television programs involving an animal’s visits to a veterinary facility. In 5 Flights Up, the portrayal of Dorothy having reluctance to climb stairs as an initial manifestation of her back pain was spot on in terms of what most canine companions exhibit with spinal problems. After rushing Dorothy to an emergency veterinary hospital (Blue Pearl Veterinary Partners), the veterinarian informed Ruth and Alex that their beloved canine was going to need a ‘cat scan’ (CT or computed tomography).

The non-medically-trained audience may not realize this, but pets requiring a CT scan or MRI (magnetic resonance imaging) need to be fully anesthetized. Both CT and MRI take a series of images as the imager moves across body surfaces, and any movement on the patient's part prevents an accurate image from being attained. Most humans are able to stay still for the entire CT scan process, but animals have to be immobilized under gas anesthesia. Dorothy was seen being wheeled into the CT scanner while taped to a tabletop, still awake and moving, and definitely not made appropriately immobile.

Additionally, when the veterinarian shows Ruth and Alex Dorothy's CT scan, the audience sees radiographs (X-rays) instead of a CT scan. As the attending veterinarian insisted on jumping right to the  CT for Dorothy, perhaps we just didn't see the radiographs gets taken. Maybe the producers felt that showing the audience Dorothy's diagnosis of a ruptured disk between the vertebrae (backbones) at the junction of her chest and low back would be better represented by showing her radiographs over her CT scan. That’s my semi-optimistic take on it the situation.

Aaaah, the magic of movies! This observation certainly isn't crucial to the plot, as Dorothy ends up having surgery, is kept in the hospital for a few days to recover sensation in her hind limbs and ultimately rejoins her human family after they decide to keep their current apartment.  Although Ruth and Alex may think they can manage five flights of stairs for some time to come, what about Dorothy's needs? Did they carry Dorothy up and down the stairs for weeks to months while she recovered from her surgery? It seems as though no consideration for Dorothy's best interest played into their decision to stay in their five-flight, walk up residence.

Despite the medical incongruences and the seeming lack of owner’s concern for Dorothy’s needs during her senior years, I thought the movie was cute, loved Cynthia Nixon as a go-getter real estate agent and enjoyed Keaton and Freeman’s portrayal of a couple navigating life together despite their chaotic and ever-changing world.