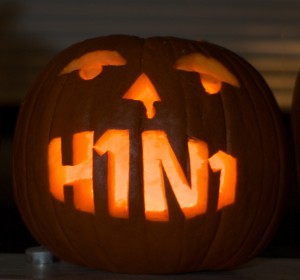 H1N1 Pumpkin photo by ChrisStreeter — Licensed under Creative Commons Attribution 2.0 Generic Just when you thought it was again safe to sneeze without covering your face with your elbow, 2009 H1N1 has made a reemergence in cats infected by their human owner. The H1N1 influenza virus, previously known as swine flu, is now termed “North American Influenza” according the World Organization for Animal Health (OIE). This labile virus wreaked havoc the health of many humans and a smaller number of animals in 2009-2010. Recently, two Domestic Short Haired (DSH) cats in Wisconsin were diagnosed with H1N1 after showing clinical signs of respiratory disease (coughing, wheezing, gasping for air, sneezing, pale pink to purple gums, collapsing, lethargy, etc). Both cats were middle aged adults (six and eight years of age) and had been in close contact with their owner, who was reportedly ill from the influenza virus. The six year old cat declined rapidly and was put to sleep, but the eight year old cat recovered until a relapse of illness led to euthanasia. The presence of the H1N1 virus was confirmed via Idexx Laboratories’ Feline Upper Respiratory Disease (URD) RealPCR Panel in the six year old cat. The eight year old cat was tested negative for H1N1 on a sample taken at the time of euthanasia. Due to the short time the virus is shed in bodily secretions (saliva, nasal discharge, ocular and respiratory tract fluid) and can be detected, there is high likelihood the eight year old cat still may have been infected with and ultimately succumb to the complications secondary to the virus. The press release from Idexx does not report confirmation of the H1N1 virus in the cats’ human owner, yet the cats likely contracted their illness and ultimately died due to exposure to illness carried by their owner or another sick person. In 2009 and 2010, ferrets, cats, and dogs were infected through the zoonotic transmission of H1N1 virus. Ferrets and cats died, but the dogs survived. As not all sick pets undergo laboratory testing to confirm the suspicion that their illness is caused by infectious organisms, it is likely that more fatalities occurred in feline and other species who succumbed to respiratory disease during the 2009 H1N1 pandemic. If your cat or dog is showing clinical signs of a respiratory tract illness, schedule an examination with your veterinarian and request that a species appropriate Upper Respiratory Disease panel is performed. The Idexx canine and feline tests detect the presence of a variety of bacterial and viral organisms besides H1N1 influenza. Appropriate treatment can be administered based on test results and suspicion of disease. Zoonotic diseases (those that can be shared between people and animals) are real, potentially life threatening public health concerns. Recently, I made an appearance on Tracie Hotchner’s “DOG TALK® the Radio Show” to discuss the potential health concerns humans potentially face from letting your pet sleep in your bed (also see Is It Safe To Let Sleeping Dogs Lie In Your Bed ). You can hear my segment about 3/4 of the way into the broadcast by following this link. 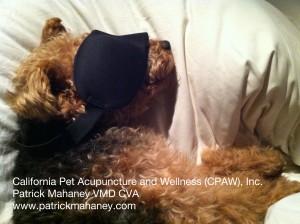 Do your part in keeping communicable diseases from infecting you and your human and animal family members. Practice good sanitary habits by washing your hands with soap and warm water after touching an animal (or other person), avoiding contact with other people and pets when you are sick, and striving for an optimal state of health through nutritious dietary and regular exercise habits. Related Articles Swine Flu Pandemic Over But H1N1 Hybrid Virus Emerges H1N1 Virus Found in a Feline and Ferrets H1N1 Infects Second Feline H1N1 Kills Oregon Cat Los Angeles Cat is California’s First Confirmed 2009 H1N1 Virus Infection in Domestic Feline Swine Flu Infects Dogs in China First US Canine 2009 N1N1 Infection Confirmed in New York Thank you for reading my article. To receive my next article via email, please press the “Don’t Miss a Blog Post” button on the right upper corner of this page or follow this link. Copyright of this article (2011) is owned by Dr. Patrick Mahaney, Veterinarian and Certified Veterinary Acupuncturist. Republishing any portion of this article must first be authorized by Dr. Patrick Mahaney. Requests for republishing must be approved by Dr. Patrick Mahaney and received in written format.
Pet Health