What Kind of Pants Does President Obama Think Dogs Should Wear?

This article originally appeared on Dr. Mahaney’s Pet-Lebrity News column on Pet360.com as What Kind of Pants Does President Obama Think Dogs Should Wear? 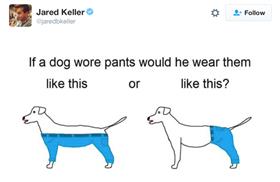 Do you know of any dogs that wear pants? Considering the way some owners cater to their dog’s needs, one may think that the canine companion is the one who wears the pants in the human-pet relationship.

Maxim magazine writer Jared K eller recently brought up the question of, if dogs were to wear pants, would they wear them with two legs or with four? Via his @jaredbkeller handle, Keller tweeted the question along with a drawing by Norbert K., a Belgian graphic design student, and generated significant on-line interest in the topic. So far, the image has had more than 33,000 retweets and more than 37,000 likes, so it’s been ample fodder for discussion like “what color is this dress?” did in 2015.

The drawing depicts two dogs from a profile view. The dog on the left wears pants that cover all four limbs with a waistline and belt that runs the horizontal circumference of the dog at the level of the dog’s shoulder. The dog on the right wears pants that cover the hind limbs and belt running vertically around the circumference of the dog’s abdomen (like a person wearing pants who has bent over at the waist and is walking on all fours).

Which Pants Option is Better for Dogs from a Health Perspective?

My veterinary perspective has to consider the practicality of both pants options, which each have their plusses and minuses. With pants that cover all four limbs and the underside of the dog’s chest and abdomen, it dog appears to be well protected from the effects of inclement weather or environmental irritants.  Yet, regardless of the dog’s sex, it looks like urinating may be a challenge. A hole for the dog’s penis would have to be made in the underside of the pants at the level of the mid-abdomen for a male and a female would require a similar hole on the under and extreme backside of the pelvis below the tail and anus.

The dog on the right benefits from the front limbs being free to move without hindrance by material, but the limbs are then left susceptible to trauma from any offending source.  Similar to the dog on the left, the dog on the right requires an opening for both male and female anatomy to facility urination and also requires an opening for feces to exit the anus.  Generally, unless these dogs are very dexterous with their paws or mouth, gaining access to the ports for peeing and pooping through a zipper or button fly is going to be logistically improbable.

What Does President Obama Have to Say About Dogs Wearing Pants?

Politico reports that during an interview with Adande Thorne (YouTube star Swoozie), Obama showed a preference for the two-legged version. “This, I think, it’s a little too conservative … too much fabric,” was Obama’s perspective on the four-legged version.

Considering the recent winter storm that blanketed Washington DC with over two feet of snow, I’m surprised that Obama wouldn’t be more of a fan of dogs wearing pants.  As Bo and Sonny get quite snow covered during their outings on the White House lawn (see Bo And Sunny Obama Are Having A Great Snow Day), pairs of custom-made snow-repelling pants could serve them well.  I guess having White House staff around to walk Bo and Sonny and clean them up after their outings reduces Obama’s personal drive to minimize his daily pet-care responsibilities.

Do your dogs ever wear pants or any other limb-covering devices?  Feel free to share your perspective in the comments section.