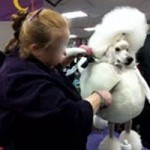 Poodle being prepped for competition at the WKC Dog Show, by Dr. Patrick Mahaney

This article originally appeared on Dr. Mahaney’s The Daily Vet column on PetMD as Cosmetic 'Doping' in the Dog Show World.

After seeing Oprah Winfrey interview Lance Armstrong and cringing upon hearing Armstrong’s semi-admission of “doping” (taking banned performance enhancing substances) throughout his cycling career, I got to thinking about doping in other sports.

There’s much speculation or confirmation that many human athletes, like baseball’s Barry Bonds, Russian female Olympic weight lifters, and others have taken substances for better muscular strength, greater endurance, or speedier recovery. Even recently, a pre-Super Bowl scandal emerged involving Baltimore Ravens player Ray Lewis, who is being accused of purchasing "deer antler spray" containing Insulin-Like Growth Factor-1 (IGF-1), about which I wrote in the article Could Your Pet Be Taking a Substance Banned by the NFL?

I then started to consider the means by which doping occurs in the realm of animal-based sporting events. After all, some horses are given Furosemide (a diuretic) to reduce pulmonary hemorrhage (bleeding) that occurs during strenuous activity like racing. I see the medicinal value in this practice, as the horse is less likely to suffer from exercise-induced lung damage.

Actually, I’ve witnessed milder forms of performance enhancement being used on the canine competitors at the Westminster Kennel Club (WKC) All Breed Dog Show. For the past four years, I’ve provided media coverage for the show (see Is the Affenpinscher a Healthy Example of Westminster’s Best in Show?) and witnessed the use of cosmetic enhancing polishes, powders, and sprays in the show’s benching area.

The benching areas are a series of wooden cubicles where the competing dogs and their caretakers are required to remain around their time in the show ring (unless a win propels them onto the next level of competition).

As the WKC is a public benched show, the dog-loving community has access to the canine competitors, their groomer/handlers/breeders, and sometimes even celebrity owners (like Martha Stewart's Genghis Khan, a Chow Chow who won Best in Breed at the 2012 show).

I’m a fan of public benching, as it provides people with many opportunities to become better educated about their preferred breed of dog and then determine if pursuing ownership of that breed is appropriate for one’s lifestyle and financial situation.

Yet, with great transparency also comes complete disclosure about the grooming practices used to get a particular pooch appropriately primped. Although the use of certain products is officially prohibited by the WKC, it's still a practice widely undertaken by seemingly all of the show’s participants.

To clarify the situation, I spoke with WKC’s Director of Communications, David Frei, who informed me that WKC judges must not be able to detect any substances capable of altering a dog's appearance. Frie referred me to the American Kennel Club’s Rules Applied to Dog Shows, by which the WKC abides. The closest terminology I found pertains to cleaning and coloring and agents.

SECTION 8-C. No dog shall be eligible to compete at any show and no dog shall receive any award at any show in the event the natural color or shade of natural color or the natural markings of the dog have been altered or changed by the use of any substance whether such substance may have been used for cleaning purposes or for any other reason. Such cleaning substances are to be removed before the dog enters the ring.

So, does this rule mean that hairspray used to construct a Shih Tzu’s beehive or powders that brighten a West Highland White terrier’s coat are permitted? From my conversation with Frei, I speculate that such products just cannot be obviously felt, seen or smelled by the judges. Would these breeds be judged differently if they had a more “au naturel” look instead being teased to extraordinary heights or radiating a slightly duller aura of white?

From my perspective as a veterinarian, there are health concerns associated with the use of chemicals on or around pets. My own eyes and nose felt the effects of being in close proximity to the dogs that were being exposed to frequent spritzes of hairspray. Aerosolized irritants can easily enter the eyes, nose, mouth, and respiratory tract, and can contribute to inflammation and illness.

What do you think? Should polishes, powders, and sprays be permitted in dog shows?

Thank you for reading this article. Your questions and comments are completely welcome (I’ll respond).