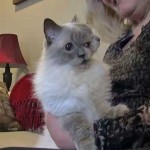 This article originally appeared on Dr. Mahaney’s The Daily Vet column on PetMD as World's Oldest Two-Faced Cat Dies at 15 Years of Age. I was saddened to hear the news of a remarkable, two-faced, 15-year-old cat who recently passed away. Yet, I’m intrigued to learn more about this feline and how he lived to such an advanced age despite his physical challenges. The Worcester Telegram reported the death of Frank and Louie the cat (yes, the cat is “singular”) in North Grafton, Massachusetts, at the Cummings School of Veterinary Medicine at Tufts University. The Tufts veterinarians diagnosed Frank and Louie with advanced cancer and he was humanely euthanized.

Why Did Frank and Louie Have Two Faces?

Frank and Louie was born with a congenital condition called Diprosopia, which technically means that he was a “two-faced conjoined twin (an incompletely separated conjoined twin). Louie lacked an esophagus, so the Frank side was responsible for all the eating and drinking and was the primary supporter of life. According to Guinness World Records life sciences consultant Dr. Karl Shuker, “Cats such as Frank and Louie, born with two faces, suffer from a developmental abnormality known as diprosopia, in which the face widens and partially duplicates during embryogeny due to the excessive production of a specific protein called SHH.” Frank and Louie attained quite the celebrity status in his time and was inducted into the Guinness Book of World Records in 2006 for being the longest surviving two-faced cat. Two-faced cats are also known as Janus cats. Dr. Shuker reportedly coined the term Janus cat after the Roman god Janus, who is commonly portrayed as having two faces. It’s notable that Frank and Louie was born alive, as most Diprosopus humans are stillborn. Also extraordinary is that he successfully thrived from a kitten into an adult cat, as many don’t make it past the first few hours or days of life. Martha “Marty” Stevens was Frank and Louie’s owner; she became aware of him in 1999 during her employment as a veterinary nurse at Tufts when he was brought in for euthanasia back when he was just one day old. Although veterinarians warned Stevens of the likelihood that Frank and Louie wouldn’t survive longer than a few days, she persevered and “tube-fed him until he was 3 months old because I was afraid he wouldn't be able to eat.”

Was Frank and Louie Able to Function Like a Normal Cat?

Yes, Frank and Louie was eventually able to eat and drink on his own, though only from the Frank side of the head. The Louie side lacked a mandible (lower jaw) and couldn't do the work of chewing and swallowing like Frank, so Louie had some of his teeth surgically removed. Being tube fed for three months is a long time for any cat, especially considering most kittens are only tube fed for the first few days to weeks, pending their ability to nurse from their mother (or a suitable surrogate) and to eventually consume solid foods. Stevens reports Frank and Louie “grew up in a shoebox” and “went to work with me every day for the first three months of his life.” Diprosopus newborns are commonly born with cleft palate and other facial and jaw deformities that affect their ability to consume water and nutrients, which results in a failure to thrive. Tube feeding can help, but there exists the risk for potentially fatal problems like aspiration pneumonia associated with inhalation of food or liquid through the palate defect or by improper tube feeding. Frank and Louie reportedly became friendly with his household companions, which included a dog, and even was tolerant of an opera-singing parrot. He enjoyed activity, including going outside for excursions and dexterously playing with toys, as seen in this Worcester Telegram YouTube video, Frank and Louie, two-faced cat.

Did Frank and Louie Face Health Challenges Throughout His Life?

Frank and Louie had two visual outer eyes and a non-functional (blind) inner eye, so there were three eyes shared by the two heads. Additionally, he had two mouths and two noses, but only one brain. Frank and Louie also was neutered, as passing on his genes to a new generation of cats that could be born with similar defects isn’t a good ethical practice. Yet, his development of cancer is an occurrence quite common to both cats and dogs these days. According to PetCancerAwareness.org:   Rest in peace Frank and Louie. I commend Stevens for her hard work in providing you the ability to live to such an advanced age despite the challenges nature inherently provided you. Thank you for reading this article.  Your questions and comments are completely welcome (I’ll respond). Please feel free to communicate with me through Twitter (@PatrickMahaney) and follow my adventures in veterinary medicine by liking Patrick Mahaney: Veterinarian Acupuncture Pain Management for Your Pets on Facebook. Copyright of this article (2015) is owned by Dr Patrick Mahaney, Veterinarian and Certified Veterinary Acupuncturist. Republishing any portion of this article must first be authorized by Dr Patrick Mahaney. Requests for republishing must be approved by Dr Patrick Mahaney and received in written format.
Cats