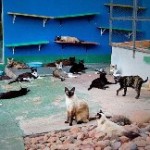 This article originally appeared on Dr. Mahaney’s The Daily Vet column on PetMD as Woman Who Hoarded Cats Meets Tragic End.
In writing about this unpleasant topic, I’m compelled to first proclaim that to me nothing sounds more horrible than being eaten by one’s own companion animal. Fortunately, I have survived to 40 years without incurring any major damage from an animal’s bite, although I’ve had a few punctures and scratches from my canine and feline patients along the way. It seems like every few months the media reports on an unfortunate soul who passed away and was discovered to be missing a few digits or chunks of other body parts as a result of the survival efforts of their starving household animal companions. Recently, the Huffington Post made me aware of a horrific story about a woman found deceased and partially eaten by her cats. The article, Janet Veal, Reclusive Cat Owner, 'Gnawed And Eaten' By Pets After She Dies, read in part:

The body of a reclusive British woman was "gnawed and eaten" by her starving pets after she died, according to a coroner's inquest. By the time British police discovered the body of Janet Veal, she'd apparently been dead for as long as three months. Her house made for a grim scene, littered with the carcasses of numerous pet cats and dogs that had been confined in the house and died of apparent starvation. But then investigators discovered something worse: Veal's remaining cats had survived by feeding on her corpse. "Certain parts of Mrs. Veal’s body were missing and had ... effectively been gnawed and eaten away by the animals,” Coroner Keith Wiseman said in Southampton Coroner’s Court.

Although Veal obviously felt no pain from the animal bites (as she was deceased), the mere picture of her cats and dogs gnawing on her cold dead limbs (or maybe they weren't so cold) makes me cringe. The circumstance brings to light the series of problems associated with people who are animal hoarders. How many animals does it take to make a person an animal hoarder? Experts say that a person is classified as an animal hoarder when the number of pets they care for exceeds their ability to provide appropriate medical care. Additionally, animal hoarders have psychological and behavioral problems permitting reasonable recognition of the adverse effect their lifestyle has on their personal and professional relationships. What makes an animal hoarder feel the need to bring so many animals into their home? The answer is multifaceted and typically results from animal hoarders having good intentions that go awry. They want to help dogs, cats, or other species, yet their altruism is skewed by underlying mental illness. Why do I find this topic so intriguing? I have come across people and situations in my veterinary practice that fit the animal hoarder characteristics. There are clear and valid concerns for the health of the pets and humans involved in these situations. Invariably, urine and feces fouls the confined spaces housing an inappropriately large number of animals. Life-threatening diseases caused by viruses, bacteria, or parasites can be transmitted to people or other animals by feces, urine, saliva, blood, or trauma (bites, scratches). Additionally, general wellness is neglected; therefore, a variety of preventable illnesses emerge, or hoarded pets are discovered deceased. Images of animal hoarding situations are often unsettling and send a powerful message that should promote greater public awareness of this serious veterinary and human public health problem. There’s even an Animal Planet show featuring the tragic stories of poor human and animal health (both physical and mental, for all involved parties) called Confessions: Animal Hoarding In general, the point of the show is to shed a sympathetic light on animal hoarders and ultimately to help their furry companions who are suffering as a result of the hoarding environment. With greater public awareness, the animals involved in these unfortunate situations can receive proper medical care and be re-homed to more appropriate environments that conducive to a healthy lifestyle.