What Does a Veterinarian Do When a Pet With a Complicated Medical History Gets Sick Again? 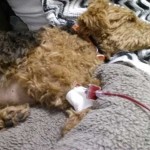