A Veterinarian’s Perspective on the Movie Max

This article originally appeared on Dr. Mahaney’s Pet-Lebrity News column on Pet360.com as A Veterinarian’s Perspective on the Movie Max 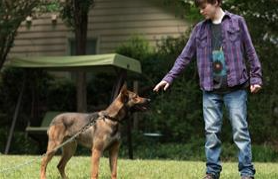 It was a pleasure to receive an invitation for a screening of Max, a Warner Bros. and Metro-Goldyn-Mayer Pictures film that opened in June. If you follow Pet-Lebrity News, you know that I screen movies and weigh in on the animal aspects for this column. As a veterinarian, it's hard to turn off my clinical brain and just focus on the pure entertainment aspects of the film. With that in mind, here are my thoughts on Max.

What’s the storyline of Max?

Max is a quintessential tale of a boy and his dog. The boy is Justin Wincott, a moody teenager from Texas who recently lost his older brother, Kyle, during a Marine tour of duty in Afghanistan under suspicious circumstances. Kyle was the handler of Max, a military-trained Belgian Malinois who thrived in the field tracking down contraband weapons and had an extraordinarily strong bond with Kyle.

Suffering from post-traumatic stress disorder upon Kyle’s death, Max is deemed unsuitable for duty due to his exhibition of undesirable behaviors and is shipped back to the U.S. and slated for euthanasia. Max’s original trainer gives him another chance when Max responds favorably to Justin and is subsequently adopted into the Wincott family. Some growing pains occur during Max’s acclimation to the non-military-dog life, but he ultimately bonds to Justin under the tutelage of Carmen, a friend’s cousin who ultimately becomes Justin’s girlfriend (spoiler alert).

Max is given a chance at redemption even after Kyle’s buddy Tyler created distrust between Max and Justin’s father by fabricating a story about Max turning on Kyle and having contributed to his death. It turns out Tyler has been dishonorably discharged from the Marines, is involved in arms dealing across the Mexican border, and has nobody’s better interests served but for his own financial gain.  Max helps Justin discover Tyler’s indiscretions and redeems himself to Justin’s family in the process of bringing down Tyler’s arms-dealing ring.

There are many aspects of Max that I found favorable. First, the movie is predominantly shot with live dogs instead of featuring their computer generated (CG) versions. Seeing CG animals makes me cringe, especially those that speak in a voice accompanied by humanoid mouth movements. Fortunately, the only talking Max and the other featured dogs did was through their own vocalizations and body language.

Second, there were many heart-pounding scenes that showed the inherent athleticism of a Belgian Malinois like Max. From accompanying Justin on a thrilling bike chase through the woods to escaping from captivity at the local animal control and learning to scale obstacles during his formative training months, Max is a fine specimen to behold.

The film also gave good insight to the general public about the intense nature of the relationship between working dogs and their handlers. Max was bred and trained to perform as a military dog and some of his action scenes remind me of tales told by a client of mine who is part of the K9 unit of the LAPD. These dogs live to work, but they’re not forced to work to live. They truly appear to love what they do as a genetically driven and human-cultivated career path.

What did I like least about Max?
The main issue I have with the movie doesn’t involve the predictable storyline, cultural stereotyping or the eye-rolling humor. Instead, it’s the pet-nutrition message sent by the film and one of film’s likely sponsors. When Max goes to live with Justin’s family, he’s seen eating a certain brand of highly processed commercial pet food. A friend of Justin also mentions the food in another scene.

These highly processed, commercially available pet foods and treats offered are examples of foods I would strongly recommend my patients avoid.  I’d rather have them eat home-prepared foods made with fresh meats, vegetables, fruits, legumes and some real grains.

Showing an athletic hero dog like Max eating that food motivates impressionable minds to go home and feed such food to their companion canines. When I was a child, I wanted to feed my family’s toy Poodle Rascal this food because of the cute TV commercials and my impression that I was feeding real meat and other ingredients that look like nature created on images featured on the front of the bag.

When the ingredients are scrutinized, there’s nothing of the sort that is reminiscent of how nature intends dogs to eat.  Here are the top 10 ingredients (most plentiful by weight): ground yellow corn, soybean meal, beef and bone meal, ground whole wheat, animal fat (BHA), corn syrup, wheat middlings, water sufficient for processing, animal digest (source of grilled flavor), propylene glycol.

Besides not even containing ‘real meat’ I must point out that the BHA used as an animal fat preservative is on California’s “Chemicals Known to the State to Cause Cancer or Reproductive Toxicity” according to DogFoodAdvisor.com. Additionally, propylene glycol (PG) is the pet-safe version of toxic antifreeze conventionally put into your car.  PG has no place in pet foods or treats and is used as a humectant providing that flexible, moist texture found in crumbly dog foods and faux-meat treats. PG causes Heinz-body anemia in cats and was removed from feline foods and treats after enough cats were sickened and died.

I’m sorry for going on a tangent from the endearing theme of the movie, but the canine-loving public really needs to consider the quality of the ingredients marketed as “100% complete and balanced nutrition for your dog.”

Is the Belgian Malinois a dog appropriate for the typical dog-loving family?

The Belgian Malinios is a noble dog that is very devoted to his master, but it’s not a breed I would recommend the average family adopt. According to the American Kennel Club, the “Mal” is a strong, intelligent, and confident herding group breed and a high-energy worker who demands plenty of exercise. They are squarely built, proud and alert herders standing 22 to 26 inches at the shoulder. There’s an honest, no-frills look about them, as befit dogs built to work hard for their feed. Mals are strong and well muscled, but more elegant than bulky. A breed hallmark is a proud carriage of the head and their coat colors range from a rich fawn to mahogany. The black ears and mask accentuate the smart, questioning gaze emanating from eyes the color of dark Belgian chocolate.

On more than one occasion, I’ve seen lovers of the Mal pay a hefty sum to a breeder or adopt a Mal from a rescue, go through extensive training and still be unable to control canine as a companion animal. Turning off the Mal’s inherent herding and working instincts is extremely challenging even for the most experienced trainers.

Additionally, concern exists about the public’s increased awareness of the breed as a result of the movie and the potential that unscrupulous breeders will supply behaviorally-suspect or genetically-compromised dogs to meet demand for the Mal. OregonLive’s Pet Talk refers to the “101 Dalmatian Effect” where after the “popular 1996 remake, shelters throughout the country reported spikes in unwanted Dalmatians after people realized they could be more challenging than the cute, playful pets portrayed in the movies.”

Let’s hope that the positive messages of the film about staying devoted to our animal companions, always telling the truth and standing by loved ones during times of adversity sent are heard far and wide. Additionally, Max can help open the public’s eyes about choosing a breed best suited to your family’s lifestyle and expose processed pet food manufacturers for the potentially toxic and carcinogenic ingredients they try pass of as the healthiest choice for our companion canines and felines.