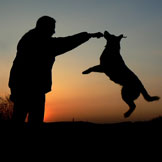 I recently attended AAHA Phoenix 2013, the American Animal Hospital Association’s yearly conference, and sat on the Veterinarian and Pet Bloggers: Veterans of the Social Media "War Zone" panel on behalf of BlogPaws, a worldwide pet media organization of which I am a board member. Among others, our panel included fellow petMD writer Dr. Lorie Houston. Dr. Huston and I shared our triumphs and failures in using social media to develop and grow our veterinary businesses.

In addition to being a panel member, another highlight of the convention was the opportunity to learn of the work being done to promote the well-being of animals inhabiting desert communities.

Native American reservations in Arizona and South Dakota have been hit hard by the economic recession, as 30-85 percent of families live below the poverty level. Very often, these communities are devastated by poverty, unemployment, addiction, and crime. As a result, many people have abandoned their canine and feline companions or are on the verge of relinquishing their pets due to their reduced ability to provide basic care for them.

That’s where Rescue Operation for Animals of Reservations (ROAR) steps in to help. ROAR is part of a larger charitable body, the National Relief Charities(NRC), and was conceived in 2008 through a network of welfare groups existing on reservations that provide animal rescue and animal foster care. ROAR strives to empower people who help dogs and cats that are abandoned, abused, diseased, neglected, or traumatized.

Reasons for why ROAR’s help is needed include:

Approximately 1,500 stray dogs roam the Navajo Reservation. Overpopulation often coincides with increased public health risk, including exposure to rabies virus through dog bites and spread of the virus to other species.

In a five year period, the Navajo community of Chinle, AZ reported more than 10,500 cases of ringworm. By treating the disease in animals, ringworm infection incidences in humans are also lowered.

ROAR actively participates in rescue and foster care for many animals that are then adopted into forever homes in the Phoenix, AZ metropolitan area.

Prior to the existence of ROAR, animal rescuers on the reservations had to pay for food and medical supplies out of their own pockets or use their homes as temporary shelters.

At the AAHA conference, I learned of some of the remarkable stories of animals overcoming adversity as a result of ROAR’s contributions, including:

Lucy, a German Shepherd Dog mix discovered in a box with another puppy and an adult cat who served as their protector.
Sam, the Labrador Retriever whose owner was killed in a car accident which left Sam with a dislocated hip and lung contusions. After recovering from the accident, Sam has become a search and rescue dog, which fulfilled the wishes of his deceased owner.

Emmy, a mixed breed who was hit by a car; her injuries managed by her family for ten days before they relinquished her. Emmy had a badly injured forelimb, which was amputated, and a damaged hindlimb, which was surgically repaired.
Bailey, an American Eskimo Dog struck by a UPS truck, which lead to eventual amputation of his left hindlimb and extensive grafting of the skin on his abdomen and back.

Partnering with reservation veterinarians and mobile clinics to provide spay and neuter surgeries, anti-parasite treatments, immunizations, and facilities for foster care and adoption for nearly 18,000 cats and dogs annually.

Providing monetary grants (ranging from $1,000 to $15,000 for equipment and facility repairs) to reservation shelters that rescue and rehabilitate animals, and funding between 500 and 600 spay and neuter procedures per year via mobile clinics on American Indian reservations.

Supplying approximately 65,000 pounds of pet food and supplies on an annual basis for caregivers to feed to animals that are recovering from neglect or illness. ROAR transports about 50 critical shipments to partners on 12 reservations in AZ, ME, MT, NM, SD, and UT on an annual basis.

Educating reservation communities about animal welfare so that pet owners and foster families are empowered to provide an improved level of care.

To further support ROAR’s “animaltarian” works, BlogPaws presented a check to them for $2,500. I hope to partner with ROAR in the future and donate my veterinary services to their cause. 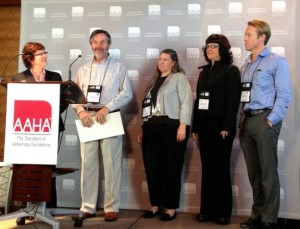 You can do your part by visiting www.roarprograms.org, or you can donate directly to National Relief Charities by texting “NRC” to 27722. 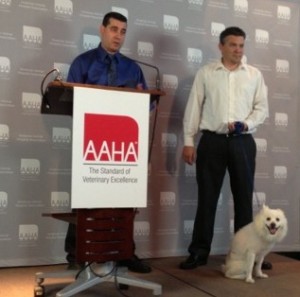 Bailey, a dog rescued through ROAR after being struck by a UPS truck, hams it up on stage at the AAHA Phoenix 2013 Yearly Conference 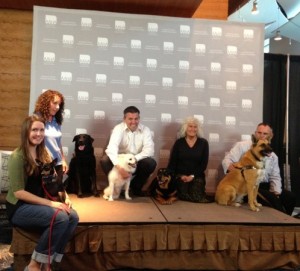 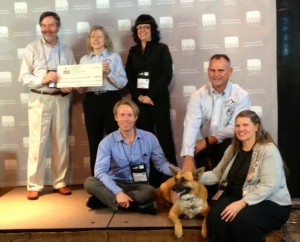