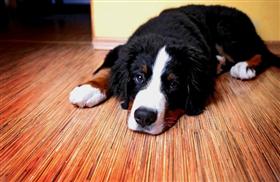 While watching an episode aptly titled Dog Children, I was struck by the circumstance in which the two lead characters, Bryan (Andrew Rannels) and David (Justin Bartha) find themselves. As co-owners to a 9- month-old Bernese Mountain Dog, Harvey Milk-bone (a play on words referring to revolutionary San Francisco mayor, Harvey Milk), Bryan and David work through their differences in opinion regarding Harvey’s medical care.

Bryan is called to veterinary hospital to meet David and the reportedly sick Harvey. As conscientious owners wanting the best for their beloved pooch, a thorough diagnostic workup, including blood tests and “a full abdominal X-ray” were performed. The very believable veterinarian, Dr. Howell, puts up two X-rays (one which features a dog vastly smaller than Harvey) and explains, “As you can see, Harvey’s abdomen is very distended. Now we can’t tell for sure, but it might be starting to twist around the digestive tract. I’d like to decompress the stomach and operate immediately.”

David, an OB/GYN by profession, gives a level-headed response in saying, “Whatever you need to do doctor.” Brian, a showrunner (one who calls all the shots on television shows) by trade, dramatically interjects, “Hold on. I don’t want you to just cut into him.” Dr. Howell’s response is “Bloat is very serious”, to which Bryan replies, “Yes, but it might not be bloat. I mean, you just said the X-rays were inconclusive. Couldn’t we just give him some medication to reduce the gas?” Dr. Howell then rattles off a list of her other patients’ serious conditions and curtly proclaims, “You two figure out what you want to do. Let me know what you decide”, then walks out of the room.

Bryan reiterates his anti-surgery stance and David replies, "If we don’t (do surgery) it could get serious very fast.” Despite his lack of medical training, Bryan then states, “No David. We’re going to give him some medication. We’re going to let him relax. Then, we’re going to take another X-ray.”

Of course, the entire time, Harvey is bright and alert, either stands or lies prostrate on the exam table, and certainly does not appear to be in the extreme state of distress (pacing, panting, retching to vomit, etc.) typically seen in most bloat patients.

The audience then has to witness Bryan throw a hissy fit in the examination room while trying to get the staff to “give my dog his medicine”, which evidently was a rehash of a scene from “Terms of Endearment” . The circumstance is one with which I am familiar that infrequently goes over well for the owner and unnecessarily makes the other clients in the waiting room quite uncomfortable.

Some time apparently passes, as Bryan calmly sits next to David and eagerly stands when Dr. Howell walks into the reception area and states, “You can call of the candlelight vigil. Your pooch is fine. He had excessive air in his GI (gastrointestinal) tract. We are going to keep him overnight and make sure the swelling goes down.  He’ll be good to go in the morning.”

Bryan questions “so gas” and David expresses disbelief that he reacted too fast in deciding that Harvey should undergo surgery. Bryan then smugly states, “David, I could have just as easily been wrong. I knew that I wasn’t.”

While I appreciate and respect an owner’s ability to make an informed choice about their pet’s care, there are many circumstances where taking what seems to be the veterinarian's more extreme treatment recommendation is truly in the patient’s best interest.

Bloat (Gastric Dilatation Volvulus or GDV) is the condition most strongly suspected to be affecting Harvey based on his X-rays (and likely physical examination, etc.). It’s a life-threatening problem that led to the ultimate demise of another famous dog, Marley from the book and movie Marley & Me. Time spent waiting instead of pursuing a more aggressive treatment protocol (including surgery) increases the likelihood that irreversible damage will affect the stomach, spleen, and other organ systems.

In Marley’s case, he underwent a non-surgical procedure to relieve the extreme accumulation of gas. Unfortunately, this is a temporary fix, as a gastropexy (surgery securing the stomach in its normal position) is needed to prevent recurrence of GDV.  According to Michigan Veterinary Specialists, “Approximately 80 % of the dogs that are treated only with stomach decompression (no pexy) will have recurrence of the bloat.”

Unfortunately, Harvey dies before returning home from the hospital, and not from his current bloat or a sudden-onset recurrence. David reports, “They (the veterinary hospital staff) take him out for a walk, he gets loose, and a car hits him” and expresses regret about the outcome by saying, “If we brought him home last night he’d still be here.”

Yet, Harvey’s untimely death isn’t the point of this article. The point is that David is both a pet owner and a doctor who let his non-medically trained partner sway the decision to provide Harvey with surgery to correct his bloat and prevent its recurrence. Perhaps if Harvey had his procedure and stayed in the hospital under intensive care (an environment where a canine patient isn’t commonly walked outside for urination and defecation) for the typical two to three days it takes to recover, the show’s conclusion would have been more positive.