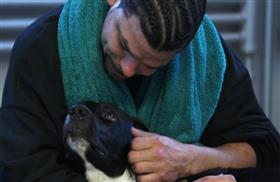 This article originally appeared on Dr. Mahaney’s Pet-Lebrity News column on Pet360.com as Prison Inmates Helped by Rescue Dogs in Documentary "Dogs on the Inside"

Are you aware of the use of rescue dogs in prisons to help rehabilitate inmates? I’ve heard of such programs before but I’ve never actually seen them in action. Recently, I was given the opportunity to review an intriguing documentary about such a program called Dogs on the Inside (YouTube Official Trailer).

While watching the film, I felt hopeful to learn the inmates' perspective on how caring for their assigned pooches evoked the feeling that they too can turn their lives around so society would give them a second chance. I then got the chance to interview co-directors Brean Cunningham and Douglas Seirup.

How did the relationship between the Mississippi based rescue (David & Mary, Connie) and the prison in Massachusetts (North Central Correctional Institution) begin?

When we began filming, there was an existing relationship between the animal shelter, Forever Home Rescue, located in Massachusetts, and the dog rescuers and fosters in Mississippi - David, Mary and Connie. We felt it was important to film in Mississippi in order to give a sense of the backstory of each of the dogs at the prison and to show where and how the dogs were found.  Knowing where the dogs came from makes the special bonds that form at the prison even more powerful.

Were you able to follow any of the inmates after the documentary to see if they were on the path to having better lives after working with the dogs?

We were able to keep in touch with Candido. Since being released from NCCI, he now works at a bakery and is getting back on my feet.  It’s certainly challenging for Candido but he remains very positive.  The dogs helped him in prison to believe in himself because he was able to help them.  He carries that feeling with him to this day.  In addition, he’s going back to school to get his GED and go onto college.  Eventually he wants to become a zookeeper which we think is an awesome idea!

Did/do the inmates receive updates about the dogs with whom they spend time after the dogs went to their new adoptive homes?

The inmates absolutely receive updates on the dogs they have rehabilitated and trained after they are adopted. The updates provide a sense of comfort for the inmates because they know the dogs are being cared for and loved. After having built such a strong bond with each of the dogs, it’s an emotionally charged day for the inmates when the dogs leave

There was a scene when Rob was preparing what appeared to be a whole food, healthier diet for his dog, Sadie, as compared to that which other dogs were seeing regulating the documentary. Did other dogs eat in this style as well?

Rob prepared this special food combination for Sadie only because she was suffering from a case of mange on her stomach (on the skin on the underside of her abdomen, that is). The combination of foods which Rob prepared for Sadie helped treat Sadie’s mange condition.  We felt it was important to feature all the steps Rob took to prepare her food in order to demonstrate his commitment to her recovery.

Considering the role the veterinarians and other scientists from Tufts University weighed in on the ways the presence of dogs can help the inmates, did any of the dogs have behavior consultations by the university's veterinary behavior specialists?

The dogs featured in the film did not have behavior consultations on the behalf of Tufts University. The use of the veterinarians and scientists from Tufts University was primarily used as supporting content in order to scientifically reinforce what we were witnessing at the prison: the strong bond, the healing, the health benefits, and so on.  Many of the actions, thoughts and behaviors the inmates and dog rescuers were stating throughout the film are reinforced by science.  But, of course, there is the timeless magic of love between dogs and people that even science can’t explain.

Did Tufts University or a nearby veterinary hospital provide medical treatment to the dogs on a regular basis during their stay at the prison?

The dogs in the film were treated on a regular basis by Forever Home Rescue New England, a great animal shelter located in Massachusetts.

What’s next for the film? Is it being shown in festivals?

The film has been released digitally on iTunes, Amazon, Google, VUDU and dogsontheinside.com as of February 10, 2015.  The DVD will be released on February 24, 2015. We are having public screenings of the film as well and would love to come to your town!  Go to www.dogsontheinside.com to request a screening and someone will reach out to you about setting up a screening.

Thanks go out to Brean Cunningham and Douglas Seirup for their efforts in making this powerful documentary and willingness to discuss their experiences in this interview.